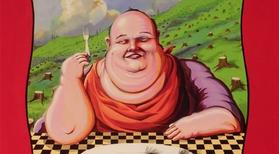 A.Reid was born in 1954 in Atlanta Georgia, the first of 4 children born to a former Korean War trainer pilot and a professional clown and horseback instructor mother who had been a stewardess for American Airlines. He grew up outside Hardscuffle Tennessee in a rural home on a former battlefield position of Confederate General Hood’s retreat. As a young child he met Walt Disney in person when his parents were background extras during filming of “The Great Locomotive Chase”. That fateful encounter would carry him through his early interest in drawing, painting, skits and collecting artifacts, peculiar curios, and nature specimens. His parents enrolled him to take art lessons from the legendary Chris Tibbott of Nashville, (still active in her mid nineties).

He was mismatched with his attendance in an old south paramilitary academy, and left at the first chance to work at the newly opened Walt DisneyWorld in 1972 as one of the first Jungle Cruise operators. There he received his art training at Walt DisneyWorld University, while working part time in the park. Narrowly missing conscription into the Vietnam war, he set off with a youthful Jack Kerouac inspired wanderlust while supporting himself as a freelance hippie artist. He studied under Jaycius McLaughlin and his merry enclave of central Florida Yippie artists and performers before venturing to Santa Cruz California in 1976. Here he created his nationally syndicated underground comix strip and rock concert posters and began performing avant garde character comedy and on radio.

He moved to Hollywood in 1983 to storyboard and art direct music videos. He toured as a character comedian with his own troupe opening for ‘The Minutemen’ and appearing in that recurring role in character on MTV’s ‘Headbanger’s Ball’. After the tragic death of his friend D.Boon, of the Minutemen, he transitioned into creating award winning album covers and serving as the personal art director of numerous celebrities who commissioned paintings of his for their private collections. He received awards for his production design of television shows on cable tv before his first public exhibition of contemporary freakshow banners and related sculpture at the Zero One Gallery in 1992 entitled, “Sideshow Gator Parts”. He was acknowledged as one of the forerunners of the “Carnivalist Movement”, which he left as it developed larger appeal and was absorbed into the Lowbrow / Pop Surrealist movement.He and his wife moved out of Hollywood in 1995 to raise a family and establish a studio outside Pasadena. He continued to provide commercial art services, film work, and independent motion capture animation design while creating private commissioned paintings and sculpture. In 2005 he journeyed to Egypt and his study of ancient mysticism continues to inspire an orientation of much of his work meshed with bombastic Americana iconography. With the encouragement of his artist peers and friends associated with the Lowbrow and Pop Surrealist movement he has begun to show his paintings and sculpture online. For the first time his paintings and artworks are available to the public. He is reclusive and rarely seen in public. He is known to be reluctant to grant interviews or attend gallery opening events. He maintains many diverse collections of interest and is very active producing creative expression in multiple forms. 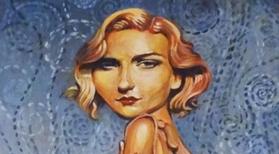 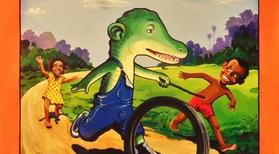